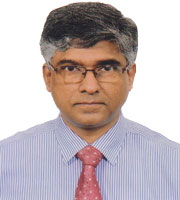 Mr. Tapan Kanti Ghosh joined the Ministry of Commerce on June 3, 2021. Prior to joinig the current post he was assigned as secretary of the Ministry of Liberation War Affairs since on July 7, 2020. He was promoted to the rank of Secretary to the Government on 5 December 2019. Prior to joining the current post, he served as the Chairman of the Bangladesh Trade and Tariff Commission.

Mr. Tapan Kanti Ghosh was born in Haridhali village of Paikgacha upazila of Khulna district. His father's name is Srinibash Chandra Ghosh and his mother's name is Radha Rani Ghosh. He passed the Secondary School Certificate  examination in 1989 from Haridhali Union Secondary School and the Higher Secondary School Certificate examination in 1981 from the government Brajalal University College, Khulna. He obtained BSS (Hons.) and MSS degrees from Economics department of Dhaka University. He completed Advanced Course on Economics & Quantitative Techniques from Bangladesh Institute of Development Studies. He also completed a diploma course in French language from Alliance Francaise. In 1989, he joined the government service as a member of the administration cadre of the 8th BCS.

During his career, Mr. Tapan Kanti Ghosh served in various districts as Assistant Commissioner, Assistant Commissioner (Land), First Class Magistrate, Upazila Executive Officer and Additional Deputy Commissioner. He later served as the Project Director of the "Integrated Community Development Project" under the Chittagong Hill Tracts Development Board for more than three years. From 2011 to 2016, he served as  the Commercial Counselor and Minister (Commerce) at the Bangladesh Embassy in Brussels, Belgium. In addition to working to improve bilateral trade and economic relations with Belgium and Luxemburg, he also looked after the issues pertaining to the economic interest of Bangladesh with the European Commission and the European Parliament.

In the aftermath of Rana Plaza tragedy, he worked closely with the European Commission and the European Parliament's Committee on International Trade (INTA) so that duty-free access of Bangladesh's main export market to the European Union was sustained. He played an important role in the formulation, implementation and monitoring of the "Sustainability Compact" which was launched in collaboration with European Union, Bangladesh, the United States and the ILO. Returning back to Dhaka, he served as Joint Secretary and Additional Secretary in the Export Wing of the Ministry of Commerce from 2016 to 2019. During this time he dedicated himself  in the formulation of bilateral trade agreements and attended meetings of the Joint Trade Committees with different countries. Besides, he played a leading role in formulating and implementing various policies to facilitate trade and increase exports including the formulation of export policies and gold policies.

He attended various meetings and conferences organized by the European Union and ILO. He participated in International Conference on Responsible Business Conduct as a panel speaker organized by the Organization for Economic Cooperation and Development (OECD) in Paris in 2018 and 2019. As member of trade delegation, he has traveled to various countries in Europe, Asia and the Americas.

Mr. Tapan Kanti Ghosh is married and blessed with one son and one daughter.

Mr. Tapan Kanti Ghosh joined the Ministry of Commerce on June 3, 2021. Prior to joinig the current post he was assigned as secretary of the Ministry of Liberation War Affairs since on July 7, 2020. Details